When to use CAPITAL LETTERS in English 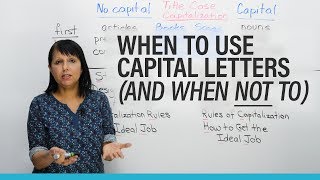 Do you know when to use capital letters in titles? It seems so confusing. Some letters are capitalized and some are not. In this lesson, I focus on the extra-confusing words — the ones that are sometimes capitalized and sometimes not! You’ll learn the easy capitalization rules for writing about subjects, courses, companies, workplaces, occupations, and job titles. You’ll also learn how to capitalize the names of movies, shows, books, songs, reports, articles, and more. You can do this — watch and learn! Then take the quiz at https://www.engvid.com/capital-letters-in-english/

Hi. I’m Rebecca from engVid, and this lesson is about confusing capitals. Now, usually when you learn the rules of English capitalization, certain words are always capitalized. Okay? For example, the first word in a sentence, the word “I”, the names of people and places, and so on. Okay? Some words are always capitalized, but in this lesson I’m not going to review all of the rules of capitalization, but I am going to show you about when to capitalize certain words and when not to capitalize them, because sometimes the same words are capitalized in one context, but not capitalized in another context. But it’s not hard to understand; it’s actually very easy. Okay? So I’m going to explain it to you right now. Let’s get started.

So, the first one is in the area of a subject or a course. For example, if we’re talking about a subject that you study, for example, algebra, then you do not capitalize it. For example, if you say: “I’m studying algebra this year.” Okay? So you’re just talking about the subject, and therefore it’s not capitalized. But if you’re talking about the subject as a course, as the name of a course, then you do capitalize it. Okay? For example: “This year I’m taking Algebra 101.” Okay? That’s the name of that course, so you do capitalize it then. Okay? Let’s look at another example. “She’s studying psychology. This year she’s studying… She’s taking Psychology 201.” Or: “She’s enrolled in the Psychology 201 class.” Okay? Excuse me. All right.

Another example: “I would like to study business in university.” Okay? The person is being very general, just talking about the subject. But: “This year I’m taking a course called Global Business.” Okay? Now you’re giving the name of the course, right? So what’s the rule here? If we’re just talking about the general subject, no capital; if we’re talking about the course, then yes, we do capitalize it. Okay? All right. There is one little exception: When we’re talking about languages, and this is always true. So if you’re studying French or whether you’re taking French 101, you’re always going to capitalize the name of a language. Okay? And that’s just because in English we always capitalize the name of a language; doesn’t matter which one. Okay? That’s it. All right.

Now let’s look when we’re talking about professions and titles. So, the rule is like this: If you’re just talking about… Let’s say: “I went to see the doctor.” Okay? Or: “I need to see a doctor.” So if before the profession you say the word “a” or “the”-okay?-then you don’t capitalize it because you’re just talking about a doctor in general; you’re not giving the name of the doctor, you’re not saying which doctor. So, here we just say: “I need to see a doctor.” Or: “I have an appointment with Dr. Patel.” Now this is the name of the doctor, right? So then we need to capitalize the “D” for “Doctor” and, of course, his or her name. All right? Next: “I would like to speak to the professor.” Okay? “The professor”, again, general, so no capital, but here: “You need to make an appointment to see Professor Brown.” […]