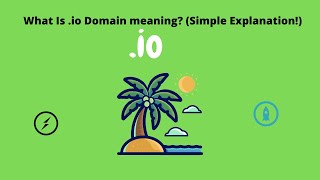 Everything you need to know about .io domain is here:https://www.buycompanyname.com/io-domain/
.io domain meaning
.io is the country code top-level domain for the British Indian Ocean Territory which is an archipelago of 58 islands and belongs to the United Kingdom. Even if this is the official meaning, most people associate .io with the popular concept of “input/output”. That’s why is so popular in tech-savvy startups.

What is .IO domain used for?
Tech-savvy startups such as fintech platforms, cybersecurity firms, mobile apps, software as a service applications use the .io domain. There is an underline meaning behind “io”, which is the concept of input/output. Here is a real example: You type a word on your pc keyboard (input) and you see the word on the screen(output).