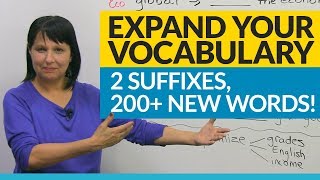 Expand your vocabulary with two easy suffixes: “-ize” and “-ization”. Start using advanced verbs like “westernize’, “criminalize”, and “democratize” in your IELTS and TOEFL essays. Use advanced nouns like “monetization”, “globalization”, and “maximization” in business letters. Learn and study vocabulary in a smarter and more efficient way by understanding how words are created with these suffixes. For the best results, get my free resource page, with over 200 words that follow this pattern: https://www.engvid.com/english-resource/improve-vocabulary-learn-suffixes-ize-ization/

Hi. I’m Rebecca from engVid. Back with another vocabulary hack. So, what’s a hack anyway? A hack is a shortcut, a way for you to learn or do anything faster and more effectively. Okay? So in this vocabulary hack lesson you’re going to learn not one word at a time, but you’re going to learn a principle that will allow you to learn hundreds of words. Does that sound good? I think so. Because when you’re learning a new language, the more vocabulary you learn, the more advanced you get. Right? So, especially if you’re going to appear for the IELTS or the TOEFL exam, this is a great lesson for you, and also if you just want to improve in your career, and at work, and write better letters to your clients and your boss, and so on, and be more impressive, this is a way to do that. Okay? Let’s learn how.

So, one of the keys to expanding your vocabulary is to use something called prefixes or suffixes. Now, a prefix is a group of letters that you add to the beginning of a word. A suffix is a group of letters that you add to the end of a word. In this vocabulary lesson we’re going to focus on suffixes that you add to a verb and to a noun. Now, these suffixes are related so that once you make the verb you can also make the noun, and so you get… From one word you’re going to get three words. And there are hundreds of words like this for which I will show you where you can get a resource so you can really expand your vocabulary. Okay?

So, let me show you how it’s done. The suffix that we add to the verb is “-ize” in American English, or “-ise” in Britain English. And to make a noun we add “-ization” in American English or “-isation” in British English. Okay? You’ll understand exactly what that means in a second. So, what does it mean when we take a word which could be a noun, it could be an adjective, and we add this suffix? What happens? What does it mean? It means that you’re going to make or cause something to be. For example, if you want to make something more final… Okay? You have reservations, you want to make them more final, so we say if we want to use the verb, we want to finalize them. Okay? See? We make the verb with the suffix. Or if you want to use the noun: the finalization of my reservations. Okay? So you add another verb and you add another noun just from one adjective, so you’ve got three words instead of just one word.

If you’re using the noun… So, what does the noun do? When we add “-ization” or “-isation”, we’re basically talking about the act, or process, or the result of making something a certain way. For example, let’s take an example from the academic world. Okay? Lots of times you have to put something into your memory. Right? Whether it’s a formula, or a poem, or a quotation, or something. So, what’s the verb for that? We add “-ize”, let’s say: “memorize”, and what’s the noun for that? “Memorization”, okay? Now, there’s a little rhythm to this and we’re going to practice that so that it comes to you really easily.

Let’s look at something from the business world. What do people in business want to do? They want to make as much money as possible, so let’s say you had the word “maximum” and you want to make it into a verb, you add the “-ize”, so you say: “I want to maximize my profits”, or: “Our focus is on the maximization of our profits.” Okay? Or: “Minimize our cost”, “Minimization of our costs”, okay? Now, even if you weren’t familiar with these words before you can see how you can use them and how easily you can form them, and this pattern applies not only to these three words, but as I said, to hundreds of words, and I’m going to show you a few more examples right now.