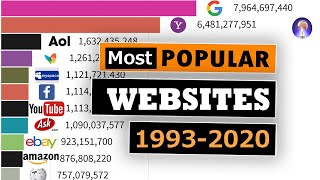 Most Popular Websites Comparison, these the most popular websites in the world, the videos contains timeline of famous website which has been visited mostly throughout the time. from 1993 to 2020.

As we know more and more people around the world begin to live more of their life online, the world’s top 10 websites continue to see explosive growth in their traffic numbers. New visit are increasing traffic on websites everyday and the growth is exponential.

During the start of 1990, AOL was the most famous and visited by users around the world. Yahoo started in 1994 Jan, and became second best best website on internet, the internet browser website Netscape remained at number 3 during the period.

by the end of 19th Century, the three most visited websites were

The trend started to change and by 2010, Google was number 1 website,
and pushed the yahoo to 2nd number again, but this time youtube was at number 3 among the top websites.

Do you know that the live streaming is increasingly a bigger part web traffic these days. A website called Twitch, which is focused on gaming, is now ranked 30th in the world in web traffic. This website is hosted on amazon is now popular that on any given night, its viewership surpasses many of the major U.S. cable networks TVs and and other entertainment..

Though, the internet is a global community, but but many of the gatekeepers are still located in the United States. If international domain suffixes of companies like Amazon and Google are counted, 60 of the 100 websites in the ranking are American.

Russia has its own famous website called Yandex, on the other hand China is a strong runner-up, with 15 websites in top 100. Since, majority of these Chinese companies are focused on the sizable domestic market, some are also making global inroads through investment, such as Baidu, Tik tok. Tencent has partially backed the fast-growing chat platform, Discord, and it also has double-digit stakes in Snapchat and Spotify.

With the exception of Baidu, all of the biggest websites in the world have swelled in size by serving a global audience.