Is it too late to make money on four-letter .com domains? 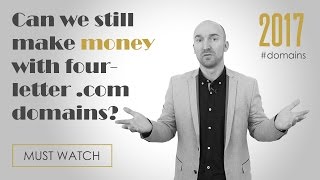 It doesn’t matter how much you paid for a domain name. It could be $9 or $9,000 – if you can identify the value, and/or depending on the domain name, if you are simply willing to wait for it to reach “fruition,” it could be a great investment. Take four-letter .com domain names as another example. Our ground-breaking research back in 2013 was huge! It was mentioned by Slate and it was trending on Reddit. The result? More than 30,000 people visited our website, and countless blogs wrote about our research in the following years. I am not mentioning this to brag; I simply brought this up because back then it was easy to buy a four-letter .com domain for less than $100, sometimes even $50. Not anymore! Now you have to look really hard if you want to buy them below $300. I am certainly looking! That’s almost a guaranteed return of 300 to 600 percent in three years. Who doesn’t want that?

Affiliate link mentioned in the video is: https://www.dnacademy.com?ref=duskic-914

We used our whois API to check all the 4-letter combinations .com domains. For example

What we confirmed that all the 4-letter domains are registered. We haven’t tried numbers, dashes, or IDNs, just 26 letters of the English alphabet. This takes us to 456,976 combinations, or domains. Not to mention that 3-letter and 2-letter domains are long gone.

4-letter domains are also known in the domaining industry under the jargon LLLL.COM or 4L. . So for example, 1PRO.COM wouldn’t be a LLLL.COM domain. Also LLLL.COM doesn’t mean literal domain llll.com but a representation of a group of domains.

Why not buy a few domain names, and leave them for your children or grandchildren?

Jeffrey Emerick entered the industry about a year ago and earned enough profit in that time for a down payment on his lakefront home (where he spoke during one Domain Sherpa interview). And he still owns 189 LLLL .com domain names. Jeffrey didn’t say, “I wish I had more money,” or “I wish I could go back in time.” My man Jeffrey took control, buckled down, took action, and he owned it!

DNAcademy will teach you tricks even if you have some experience with domain investing. I was so happy with the program that I am recommending it here. I have an affiliate link (and I am sure you can find your way around that if you think I don’t deserve the credit https://www.dnacademy.com?ref=duskic-914), and I also went through the trouble of getting you a coupon code (worth $50). Just type in WHOAPI during your order process.

Goran Duskic, founder and CEO at WhoAPI Inc. an entrepreneur with over a decade of experience in the hosting and domain industry shares several stories on four letter .com domains.