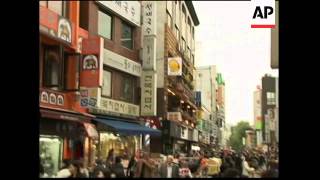 (30 Oct 2009) SHOTLIST
30 October 2009
1. Wide of board Internet Corporation for Assigned Names and Numbers (ICANN) meeting
2. Various shots of board members and audience
3. SOUNDBITE (English) Rod Beckstrom, President and Chief executive, ICANN (Internet Corporation for Assigned Names and Numbers):
“This represents a day one small step for ICANN and the IATF, but it represents a very important and significant step for half of the world of Internet users. Those who use non-Latin scripts in their own language. This helps us to live up to our shared goals of one world, one Internet, everyone connected, now in people’s own script.”
4. Various shots of meeting, board members voting then applauding
5. Pan of Seoul street
6. People in street
7. SOUNDBITE: (Korean) Vox Pop, Lee Jeong-eun, Seoul resident and internet user:
“I feel proud that we are now able to use a Korean domain in order to move around on the Internet and go to websites. Even the people who do not know English, like old people, can now conveniently use the Internet.”
29 October, 2009
8. Close of Korean script being typed into domain box
9. Elderly man using Internet
10. Various shots of Digital Library in Seoul
STORYLINE
The non-profit body that oversees Internet addresses approved on Friday the use of Hebrew, Hindi, Korean and other scripts not based on the Latin alphabet, in a decision that could make the Web dramatically more inclusive.
The board of the Internet Corporation for Assigned Names and Numbers (ICANN) voted to allow such scripts in so-called domain names, at the conclusion of a week-long meeting in Seoul, South Korea’s capital.
The decision follows years of debate and testing.
The decision clears the way for governments or their designees to submit requests for specific names, likely beginning November 16.
Internet users could start seeing them in use early next year, particularly in Arabic, Chinese and other scripts in which demand has been among the highest, ICANN officials say.
“This represents a very important and significant step for half of the world of Internet users,” Rod Beckstrom, ICANN’s president, said.
Domain names – the Internet addresses that end in “.com” and other suffixes – are the key monikers behind every Web site, e-mail address and Twitter post.
Since their creation in the 1980s, domain names have been limited to the 26 characters in the Latin alphabet used in English, A-Z, as well as 10 numerals and the hyphen.
Technical tricks have been used to allow portions of the Internet address to use other scripts, but until now, the suffix had to use those 37 characters.
That has meant Internet users with little or no knowledge of English might still have to type in Latin characters to access Web pages in Chinese or Arabic.
Although search engines can sometimes help users reach those sites, companies still need to include Latin characters on billboards and other advertisements.
Now, ICANN is allowing those same technical tricks to apply to the suffix as well, allowing the Internet to be truly multilingual.
Many of the estimated 1.5 (b) billion people online use languages such as Chinese, Thai, Arabic and Japanese, which have writing systems entirely different from English, French, German, Indonesian, Swahili and others that use Latin characters.

You can license this story through AP Archive: http://www.aparchive.com/metadata/youtube/cbe217ca784c012d2777d28a2ce5ebae