How to NAME a CRUISE SHIP? How cruise ship & ocean liner names tell you a lot about their owners! 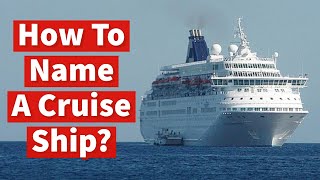 How do Cruise Lines name their new cruise ships? And why do they reuse the same cruise ship names so often? And why are some names – like Titanic and Lusitania – never reused in cruise ships?

Why are the Cunard ships named after Queens? Why did White Star ships have names like Olympic, Titanic, Britannic? Why are Holland America’s Cruise ships named with words ending in ‘dam’ and why did Carnival Cruise Line name their two new ships Mardi Gras and Carnival Celebration?

When Cunard Line established ocean voyages in 1840, they adopted a naming convention that saw the majority of their liners names end in “ia”. Similarly White Star Line adopted names ending in “ic”. Holland America Line’s ships have been given names that end in “dam” since the 1880s.

From the earliest days of passenger shipping, ships names were created to assist with marketing the shipping / cruise line. This is still true today, with many cruise lines have a shared naming convention for their fleet of cruise ships.

Other cruise lines have established words in their cruise ship names to create this same sense of familiarity. Royal Caribbean cruise ships all share the “of the Seas” suffix, P&O Australia cruise ships share the “Pacific” prefix, while Cunard’s fleet is currently all named for Queens or Queen Consorts of the United Kingdom – Queen Mary 2, Queen Victoria and Queen Elizabeth.

MSC Cruises’ new Seaside Class, consisting of four ships over 150,000 gross tons, have all been named with “Sea” as the prefix – MSC Seaside, MSC Seaview and MSC Seashore – allowing these ships to stand out as a class of ships within the MSC fleet.

So with so many different approaches to naming ships, why do we see cruise lines reusing names so often?

When Cunard’s iconic RMS Mauretania of 1907 retired in the 1930s, the line wasted little time in resurrecting the name, with a second Mauretania joining the fleet later that same decade. The list of other names Cunard reused more than once is long, and includes Caronia, Saxonia, Franconia, Carmania , RMS Queen Mary and RMS. Queen Elizabeth.

Holland America has a long tradition of having their flagship named Rotterdam. SS Rottedam sailed with HAL from 1959 until 1997. She was replaced by the 61,800 gross ton cruise ship Rotterdam, which sailed with HAL until 2020. When that Rotterdam was sold to Fred Olsen Cruises, Holland America Line announced their new Pinnacle Class cruise ship would take the name Rotterdam and become flagship of the cruise line.

Cruise Lines also benefit from reusing famous ship names through public interest and PR! Carnival’s new build ship Mardi Gras is the first in a new generation of cruise ship for Carnival, and the ship takes the name from Carnival’s first ever cruise ship. TSS. Mardi Gras. The shared name has led to many interesting comparisons between the 180,000 ton new ship and its 27,000 ton namesake.

Additionally with Carnival set to celebrate its 50th birthday in 2022 – the next new build set to debut that year – will take the name of another historic Carnival ship – Carnival Celebration.

My thanks to Andrew Sassoli Walker (https://www.solentphotographer.com) and Rob Henderson (https://bit.ly/3lRXgnp) for their image support.

Images not referenced are from Chris Frame & Rachelle Cross.

Alternative Thumbnail:
Arrow is by Matt Scribner CC by Attribution via Adobe Spark.