How to Find Out Where Your Domain Name is Registered 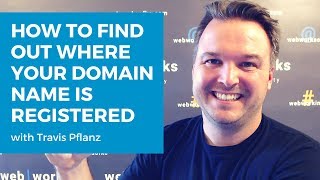 Did you lose your domain name? Find out where it could be!