How to change a verb into a noun! 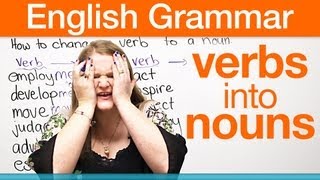 http://www.engvid.com/ With the simple addition of ‘-ment’ or ‘-ion’ to a verb, it becomes a noun! Learn how to change a verb into a noun in this grammar lesson. It’s pretty simple, once you understand how it works. Test your skills with the quiz: http://www.engvid.com/change-verbs-into-nouns/

TRANSCRIPT:
Hello, my name is Ronnie. I am going to teach you some English. It’s going to be great. It’s going to be easy, I think. Something that a lot of you have difficulty with in English is nouns, verbs, adjectives, and all those other crazy, crazy things we have in English.

I’m going to teach you two tricks that will help you, when you are trying to figure out if a word is a verb or a noun, or when to use a verb. Is it a noun? Do what? So today’s lesson is the birth of a noun. You are going to take a verb, it’s going to do some magical things, and by the end of the lesson it is going to become a noun, so birth of a noun.

How to change a verb to a noun, the first thing we are going to do is have a look at the verbs. We have the verb “employ, develop, move, judge, advertise, and establish.” Do you think you see a spelling mistake here?

Are you wondering why this is an “s” and not a “z-ed,” well, let me tell you something. In the UK also known as England, they would spell it with a zed, whereas in North America we spell it with an “s.” So there is a spelling difference.

And so, you might see it spelled with a “zed” or an “s.” Both of them are correct, if you have spellcheck when you are typing something, it might go wrong. But you might have American spellcheck, so just be careful. So, either “zed” or “s” is correct.

“Employ” do you know what that verb means? Have you heard that word, “employ?” It means use or work. The next one we have is “develop;” if you “develop” something it basically means you help to grow.

The next one is move. I am moving my right hand, but not my left hand. That would cause much problem. The next one is judge. There’s a noun of “judge” and a verb of “judge.” To “judge” something means to give your opinion.

The next one is “advertise.” The “s” and the “zed” the pronunciation is the same. Don’t worry. “Advertise” means to tell something, usually you do it for money. You “advertise” something on a website, or you advertise on TV to get a product, to make you money.

The next one is “establish, establish means to make something. What we’re going to do, two tricks. The first trick is we’re going to take these verbs, and we are going to add four letters to make it a noun. The letters are “m-e-n-t.”

So we have the verb “employ.” The noun changes to “employment.” Did you just say mint and not m-e-n-t? I did, English pronunciation is difficult. In English we don’t say employment, we actually say it like this word, “m-i-n-t.” Like a breath mint. So all of these words you must spell with “m-e-n-t,” but your pronunciation is going to be “m-i-n-t,” like “mint, employment.”

“Move,” we have the noun of movement. “Move, move,” not “move, move,” do you know why I got distracted? Because, I was thinking of a Bob Marley song that’s called “A Movement of the People, “movement” of the people. If anyone is a Bob Marley fan out there.

Next one is “establish,” changes to “establishment.” For some reason I don’t like the word “establishment.” “Establishment” means something that has been “established.” We usually use it in the form of government or politics; it can also mean a place like a restaurant. I like restaurants. The next trick, trick number one is you take the verb you change it to a noun using “m-e-n-t” or “m-i-n-t” “employment.” The next one is this word, “act.”