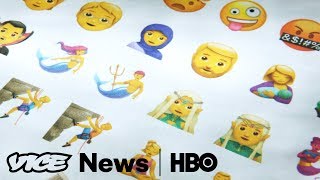 During the dot-com era of the ’90s, a simple domain name could sell for millions. Since then, search engines have made prime URLs less important, and now a new kind of domain name is up for grabs. VICE News talks to the man who believes emoji domains could be his second shot at an Internet gold rush.

In June, members of the Presidential Advisory Council on HIV/AIDS (PACHA) resigned to protest the Trump administration’s inattention. In advance of World Aids Day, VICE News interviews one council member who resigned and one who remained.

In November 2016, Indian Prime Minister Narendra Modi announced that he was immediately banning the use of the two most common banknotes — which meant taking 86 percent of the country’s currency out of circulation overnight. One year into the policy, VICE News went to India to see if Modi’s economic gamble was worth the risk.

WATCH Next: “This game combines the internet’s favorite things: cats and cryptocurrency” http://bit.ly/2iqsxhL

READ Next: “Navajo Nation is suing Trump for stealing its land” http://bit.ly/2B0SEHs