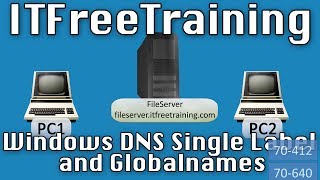 Check out http://YouTube.com/ITFreeTraining or http://itfreetraining.com for more of our always free training videos.
Globalnames allow a domain name as short as .apple, .xbox and .intranet to be used. This video looks at how to configure Windows DNS to use names like these on your internal network and also how global names will be used in the future on the internet.

Previous Networking
The first Microsoft networks used a peer to peer style system. Each computer had a computer name that was based on the NetBios standard and in the case of Microsoft networks this was limited to 15 characters. Networks had to be directly connected to each other as NetBios was not routable. However, later on, the ability to route network traffic was added to NetBios networks. This meant that on a NetBios network there could not be two computers with the same name. In order to achieve this, DNS had to be used rather than NetBios in which you could have two computers with the same name as long as the fully qualified domain name was different. For example, you could have fileserver.itfreetraining.com and fileserver.backup.itfreetraining.com on the same network as the full qualified domain names are different; however, notice that first part of the name is the same. This was not possible with NetBios.

From a user prospective, they want to be able to type in a short simple name to access a server. For example enter in NYDC1 rather than NYDC1.ITFreeTraining.local. To allow this to happen automatically Windows adds a DNS suffix to the name. This makes it simple for the user, however means that the DNS suffixes that Windows will used need to be configured on the computer. Global Name essentially allows a short simple name to be used without the need for a DNS suffix to be configured on the computer. This is the biggest noticeable missing feature from old NetBios system. In the old network NetBios system, all names were short names and thus were easy for the user to use. With DNS short names cannot be used like this and DNS requires the whole fully qualified domain name to be either entered in or Windows to automatically add a DNS suffix to the short name. So what is a global name? A global name is a short name that is compatible with DNS that allows the user to enter in a short name rather than a long name and does not require a DNS suffixes to be added by Windows to the name. This gives the user the most missed feature of NetBios networking while still being able to use DNS so, effectively, gives them the best of both worlds, that is being able to use a simple name referred to as a single label name in order to access resources on the network.

DNS Suffixes
A DNS suffix is the last part of the domain, for example ITFreeTraining.com, HighCostTraining.com or example.com. If these 3 DNS suffixes were configure on a computer and you attempted to ping the address fs1 the following would occur. FS1.ITFreeTraining.com would be tried for a match. If no match was found, FS1.HighCostTraining.com would be tried, if there was no match here then FS1.example.com would be tried. If no match was found here the computer would report that the address was not resolvable. Notice that it means that 3 DNS addresses have to be checked with the DNS server to see if any of these are resolvable. If you have a large network with a lot of suffixes this means more addresses will need to be tried before the address is returned as not resolvable. If you want an address to be resolvable by all computers in the forest for a single label name, for example you want to create an address called intranet, this could be created and accessible to all computers in the forest without the need to configure a single DNS suffix on any computer in the forest.

Description to long for YouTube. Please see the following link for the rest of the description.